Should We Raise the Minimum Wage? 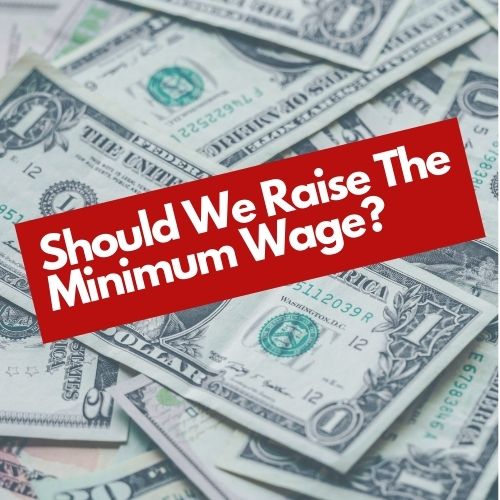 There are many reasons why people may or may not want to raise the minimum wage.

The year is 1938. The United States is still recovering from the Great Depression and on the brink of World War Two. With Americans in a tough situation, Congress passed the Fair Labor Standards Act of 1938. This was a tectonic shift in labor policy for America, and it introduced the minimum wage. At the time, it was only 25 cents, but after 22 raises, keeping up with inflation, it finally halted at $7.25 per hour in 2009. Money isn’t everything, but it sure helps if you want to have a swimming pool in your backyard filled with birdseed. As people are growing accustomed to a better quality of life, they need more money. Raising the minimum wage can help with that. And we should raise it again.

Increasing the minimum wage would propel job growth. As stated by David Cooper of the Economic Policy Institute in 2013, a minimum wage increase from the current federal rate of $7.25 to $10.10 an hour, would implant $22.1 billion extra into the economy and create more than 85,000 new jobs over a phase-in span of just three years, according to the. This is not only great for the economy but also for all Americans. New jobs would increase consumer spending because newly employed workers would take home a bigger paycheck, which means that they would have more money to spend. They would also add more diversity in spending since the more money people have, the more they would spend it on things other than rent, bills and food. They could buy a nice set of scented candles from Bath & Body Works for someone’s birthday and they could buy sweaters. Lots and lots of sweaters. I sure know I would.

A minimum wage increase would reduce poverty levels. As stated by the US Department of Labor in 2016, working full time at the federal minimum wage of $7.25 an hour, a person would earn $15,080 a year. This is 20 percent higher than the federal poverty level of 2015 at $12,331 for a one-person household under 65 years of age. Yet, working full time and earning the same amount of money, a single-parent household with a child under 18 years of age would be 8 percent under the 2015 federal poverty level of $16,337.

You can see why this is a problem.

Estimated by a 2013 study by the University of Massachusetts at Amherst, economist Arindrajit Dube, Ph.D. declared that increasing the minimum wage to $10.10 is “projected to reduce the number of non-elderly living in poverty by around 4.6 million and by 6.8 million when longer-term effects are accounted for.”  This means that adults can get jobs, children can go to school and everyone can actually do what they want and need to do. Every human being deserves to be able to support themselves and the people around them. Increasing the federal minimum wage will help people rise above poverty and help them have a wonderful life with more opportunities to pursue their goals.

A higher minimum wage would reduce government welfare spending. If more money is earned by low-income workers, their dependence and eligibility for government benefits would decrease. As reported in 2014 by the Center for American Progress, raising the federal minimum wage by six percent to $10.10 would reduce spending on Supplemental Nutrition Assistance Program (SNAP), formerly known as food stamps. This would be reduced by six percent, saving $4.6 billion. This could be used to pay off America’s large debt. I’m looking at you Congress.

Now, the year is 2021. We are struggling through the COVID-19 pandemic and many people are relying on minimum wage to help them survive. In this day and age, that yearly salary isn’t nearly enough. Job growth will skyrocket, poverty levels will come close to or even be at an all-time low and government welfare spending will plummet. This is what will happen if we increase the minimum wage. With all of this in mind, contact your representatives, protest for an increase in the minimum wage and most importantly, spread the word. Let’s make it a goal to change the federal minimum wage for the 23rd time.

Some may argue that money isn’t the most important thing on planet Earth, love is. Good for me, I love money. Everyone needs money. Someone could sure do a lot of things with a gigantic amount of cash. Money might not solve all your problems, but it definitely will solve a majority. With more money, you can have a better life quality, get more things you want, and buy everything you need. Wanting to earn more and working hard to earn more is great, but taking the shortcut and raising the minimum wage will have many downsides.

Well, if everyone wants money, there probably is a minimum wage right?

Something to help people fulfill the desire and need for money even if they aren’t able to earn a lot of it. The current federal minimum wage is $7.25.

Should we increase it, so that the people with the needs of money can earn more?

Well, I think not.

Raising the minimum wage would result in job loss.

The fact that the minimum wage is going up, means that many small business owners will have the same amount of money, but pay more for each person they hire. For example, an entrepreneur has nine employees that earn $10 per hour, so he pays $90 to pay his people. The minimum wage increased in which now each person has to get paid $15 per hour. But this entrepreneur only has $90 to give, so now he only can afford to pay six employees, causing him to have to lay off three of the staff. This is a small model, if enlarged to the whole country, these three people could turn into hundreds, if not thousands. According to CNBC, a SurveyMonkey Small Business Survey found out that one-third of small business owners believe they will probably lay off a number of people if the minimum wage is raised.

It will also cause goods to be more expensive.

Raising the minimum wage could really affect people more than we may have thought. After the minimum wage is raised, shop owners of small businesses will now have to  raise their prices if they still want to profit the same. The thing is, the employer needs a certain amount of employees for their company, whether it be working on production, helping customers, vendors etc. A sight we will see is people who aren’t on the minimum wage still get paid the same but know the prices of all the goods they buy have increased. This means they will have less and less money to spend on the things they want. This will most likely bring a certain amount of controversy and political discourse due to its impact on the economy.

According to Foundations for Economic Education, in a 2019 article “ 5 Reasons Raising the Minimum Wage is Bad Public Policy,” 80 percent of the economists they surveyed, believed  that if the minimum wage was raised, it would cause entry levels to be raised. One of the main points of raising the minimum wage is to help these people who are less skilled to be able to earn more money. However, because employers now have to pay more, they might be more likely to hire those who are more skilled with the same price. If someone was originally happily living off the minimum wage and now that the minimum wage is raised, and companies want to hire people with more experience and scale, they might not have a job anymore. Wouldn’t that dispute the entire reason to even raise the minimum wage?