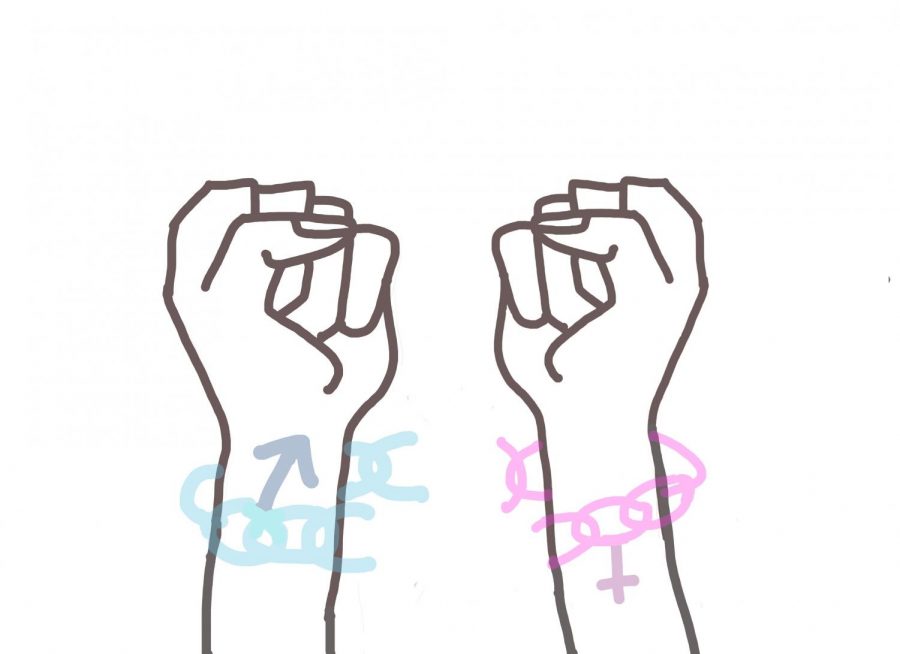 We are the people who can take away gender roles.

Gender roles affect everyone every second of their lives. Have you ever felt like you were pressured to wear a dress to church because you are a girl? Or be pushed to play sports like soccer and football because you are a boy? Well lots of people have had these feelings before. Our society was built upon the pillars of gender roles.

Sarah Fuller is a football player that has been making headlines.

“I just want to make it really clear this was never easy, this was never an easy path whatsoever, but the fact that I didn’t stop and I didn’t give up, I think it’s huge,” Fuller said, according to a tweet sent by Vanderbilt Football. At a young age, she started playing football, but was told this sport was meant for boys, not for girls. Girls didn’t get a lot of chances to do sports like these, and it wasn’t something common for girls to do either, but Sarah Fuller persevered. She trudged on and never stopped. She did not let gender roles become barricades to her dream. She kept on playing football even when others told her it wasn’t worth it; she kept on pursuing her dream, and it worked. In a Power 5 football game, Sarah Fuller was the first woman to ever score points.

Just because someone is a girl, does it mean they have to dress up in cute little dresses and have bows in their hair? Society expects them to, but they can choose not to. These gender roles are brought into our lives starting from a young age, they affect our everyday lives, but there are many people who have broken down these gender roles. One of the best examples is childhood stories and fairytales.

For instance Cinderella and Snow White, stories our parents read to us while we were entranced in this magical world and slowly fell asleep beside them, more than a thousand versions, but they all are built upon gender roles. The woman has to be beautiful, light skinned, skinny, and kind telling us, as children, only beautiful people have the right to be loved and love. According to the Women’s Media Center, Purdue University sociologist found out 94 percent of the Grimms’ fairy tales acknowledged physical appearance and the average references per story were 13.6. Stories could also lead us in a bad direction. They tell girls they should rely on men because only men can fight and save them, and the ultimate reward for a woman is to get married to the handsome love of their life, and to live happily ever after. For example in Snow White, she was awakened by her Prince Charming with a kiss, then they got married, and lived happily ever after. These women can only stay at home, take care of children, clean, and do chores. Fighting, wearing pants, not being proper, not being polite, not treating the men, could lead to severe punishment. This is the same for men, they are taught to be manly, not as proper, going out and working, slaying dragons, being warriors and so on. The new generation should not be bound by the chains of these stories, telling them how they are supposed to act, think, or feel.

Gender roles affect our lives in more ways than one, ranging from the little things, and the big things. Starting from when we were babies, these gender modes have always been there. Girls usually wear pink outfits, while boys wear blue outfits because at stores, these are the “supposed” looks. As little kids, parents gave boys dinosaurs, cars, legos to play with, while girls had Barbies, dolls, and Shopkins. Boys are taught to be brave, courageous, and stoic. As these kids gradually get older, females are expected to be wearing dresses, short skirts, makeup and be their most beautiful physical self.  These stereotypes could also affect people’s mindset about occupation and jobs. When you think of women occupations do you immediately jump to nurses, teachers, baby sitters? How about men? Engineers, police officers, and construction workers? These roles affect us our whole lives and it’s impossible to eliminate them because they have been hammered into our society for centuries. What we can do is to decrease the amount of expected gender roles. Guys having long hair or wearing dresses should not be frowned upon. Girls should have more career options. Men and women should get equal pay.

There are people who have broken these roles. All in all, society is improving. Women can become world leaders and boys can wear makeup too. There have been many people that have broken these gender roles and played the role of telling people what a world free of these expectations and stereotypes could look like. When we think of presidents, the first thing that comes to mind is old white dudes, but there have been those who do not fit this stereotype, those who have broken down the barriers, and not letting these gender roles stop them. A perfect example is Kamala Harris, the Vice President of the United States of America. Not only is she the first female vice president of the United States, but also the first black and Asian US Vice President. Anyone can break these gender roles as long as they stand tall and not let those rules burden them. We can work together to shape our society into a place where everyone is welcomed with open arms.

It is our own choice and our own choice alone. We are the only ones who can change the discrimination and sexism toward gender roles. We can make it so that the generations after us are not taught about these gender roles as children. We can change the fact that they affect our everyday lives everywhere we go and we can all be the ones who have broken down these gender roles. You can help by backing up a friend or a stranger when they are faced with prejudice simply because they are a girl or a boy. Tell the person looking down at them they are wrong. Tell the person being hurt that they matter, they are special the way they are, and that everyone should get to live out their best self the way that they want.