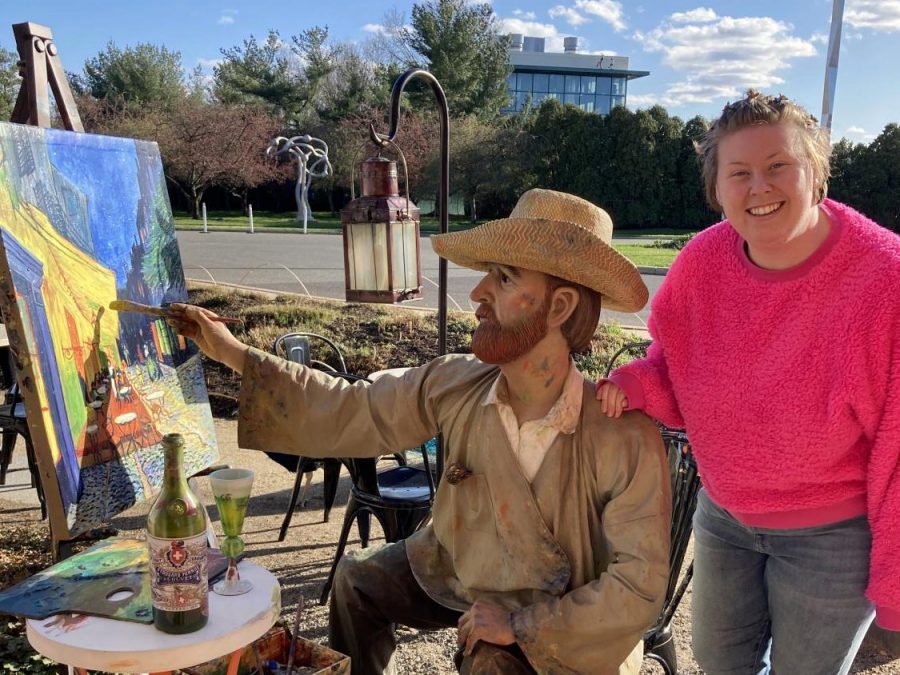 Moravy-Penchansky and a sculpture of Vincent van Gogh at Grounds for Sculpture, a park in Hamilton, New Jersey.

When teacher Cassidy Moravy-Penchansky is in an art room she is constantly on the move.

“I can see their progress, they’re making art, and you know you can tell by the look on a kid’s face whether they’re understanding what they’re supposed to be doing,” Moravy-Penchansky said.

It was in an Ann Arbor classroom at Community High School  where she was inspired to become an art teacher.

“I actually never took art in middle school,” Moravy-Penchansky said. “I was in choir and I took, Latin, so I didn’t have time to take art. So now I actually work with the woman who would have taught me art in middle school, which is really fun and she’s so lovely. After that I went to Community High School, and I loved my time there, and that’s where I really got into art and started thinking about education as something that I might want to do.”

She went to Eastern Michigan University and got her degree in art education and delved into fiber arts.

“Until I took ‘Intro to Fiber Arts’ and I had so much fun that I did that as my concentration, as an artist, so I really enjoy doing that kind of thing,” she said. “But they are much bigger undertakings like to weave something that takes a lot longer than to like you know, do a painting really fast. So, I don’t get to do fiber arts as much as I would like to.”

Moravy-Penchansky has been living in Ann Arbor for a long time. She did a long-term substitute art teacher job at STEAM Elementary. After that she worked at another school, doing art projects and teaching. She got a long-term subbing job at Clague in September 2019. In January 2020, it became a full time job at Clague. She continues teaching and interacting with students.

When she is teaching students, she has many different classes that she likes to teach, such as Photography, Drawing & Printmaking, Ceramics, and Painting & Composition.

“I had a lot of fun with the printmaking from last quarter [Quarter 2], because that’s not something that I was thinking we would be able to do at home, but we found a pretty easy, fun way to do it that anybody who has like a piece of styrofoam and a pencil and a little bit of paint can do it. So that was really fun to learn,” said Moravy-Penchansky.

At home she has a cat named Kida after a Disney Princess in Atlantis The Lost Empire. She has many different hobbies that she enjoys doing including art: drawing and painting. She is also working on embroidery right now. Moravy-Penchansky just got into diamond dot painting. It includes plastic dots and making art out of it by putting it in the numbers. She likes to read, write and watch movies.

“I love to do puzzles,” Moravy-Penchansky said. “That’s a big hobby of mine, yeah puzzles are so fun. Mrs. Hochella just got me this wonderful puzzle that actually has like a bonus level it’s so cool. It’s called the Magic Puzzle Company. And I also am a plant lover so I have lots of plants. Some of them are dead but some of them are alive still!”