Has cancel culture gone too far in the US? 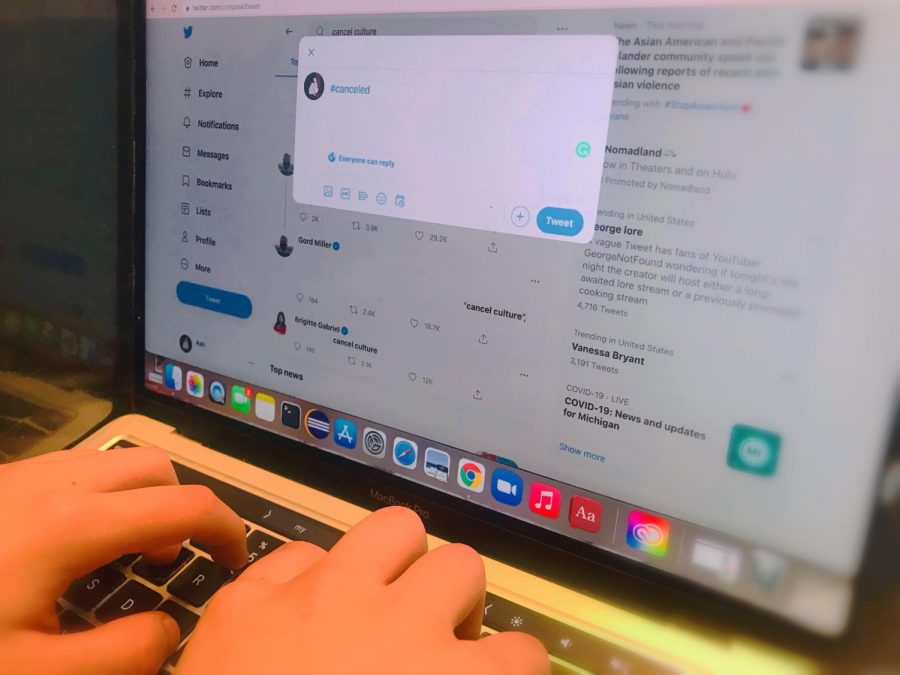 Cancel culture should not be a way of ruining lives, but a way to call out those who make bad choices and help them grow.

Warning: Some topics may evoke certain feelings // This article contains sensitive topics // In this article there are mentions of cyberbullying, self-harm, and blackface.

Cyberbullying is a familiar topic, internet safety very extensively talked about in schools. But then the question emerges: Is cyberbullying a bully okay?

The answer is usually (and should always be) no.

Well, with cancel culture, maybe so.

Cancel culture (or “call-out culture”) is a phenomenon that has become common in our country these past few years, done mostly by millennials and Gen Z. The notion that a person can be “canceled” — meaning to stop giving support to that person —  has become very broadly used.

The act of canceling could cause boycotting the “canceled” actor’s movies or no longer reading/promoting a “canceled” writer’s works.

The idea of cancel culture is uncomplicated to understand, and follows a familiar pattern: a celebrity or another public figure does or says something offensive, or disagreeable by the general public,  — and then comes the brutal online war of words.

And yes, sometimes, this will be a case of serving justice.

People who’ve made bad choices will get canceled, and it might feel good to bully them on the Internet, see their karma play out, hidden behind harsh words. However, when it goes too far, it becomes an issue.

Most times it is mainly based on rumors that can be easily falsified. Those rumors are often the start of misinformation, and as some onlookers jump on the hate bandwagon and don’t look deeper into the story, innocent people are often the target of unwarranted slander or hate.

According to Good Morning America, in March 2019, this exact scenario happened to the artist Mary Purdie after she was accused of plagiarism for a piece of artwork. Yet, after thousands of hate comments with vicious words, and even death threats were sent to her with malicious intent, this claim was later proven to be false.

The plagiarism claims were untrue, however, Purdie is still dealing with the “residual trauma” from the incident.

Secondly, we should give people a chance to realize their wrongdoings without canceling them for the entire world to see.

According to an article by TheThings, on the Biggest Celebrity Cancellations of 2020 (So far) written in September of 2020, the list of canceled celebrities goes on and on — once every week.

Take Jimmy Fallon for example.  He’s a famous and diplomatic TV host, but even he got canceled in 2020. A video of Fallon doing a Chris Rock impersonation on Saturday Night Live went viral because he was wearing blackface. The footage dates from 2000 (two decades ago), but very soon, the hashtag #jimmyfallonisoverparty was already trending. Fallon himself did not cut corners and admitted it was a terrible decision, and there were no excuses. He apologized, and his post got varying responses.

Even with no ill intent behind it, what he did was wrong, and absolutely unacceptable.

Fallon has changed and grown plenty as a person in these two decades, and I don’t think he, the person he is now — deserves to be canceled and shunned, have his reputation slandered, and his career broken because he made a mistake so many years before. I believe we should give people a chance to change.

Because people CAN change.

Speaking of change, according to an article by GoodMorning America, on January 17, 2020, a case of cancel culture happened to Natasha Tynes, a Jordanian-American.

She was on her daily commute to work when she thoughtlessly posted a particular Twitter post that would cause her life to unravel.

It took less than 240 characters and 35 minutes to dismantle a career and book she spent four years writing.

The now-deleted tweet reads: “When you’re on your morning commute & see @wmata employee in UNIFORM eating on the train. I thought we were not allowed to eat on the train. This is unacceptable. Hope @wmata responds. When I asked the employee about this, her response was, ‘worry about yourself.'”

She deleted the tweet quickly after the flood of replies accusing her of racism, realizing she had made an “error of judgment.” She also thereafter tweeted an apology and said she called the Metro Authority to make sure the employee wouldn’t be penalized.

Her book was officially canceled and so was she. All her work… wooshed down the drain with an errant tweet.

Tynes said she landed in the emergency room that night after experiencing a “nervous breakdown.”

And the thing is — Tyra’s case isn’t even that unique. Cancel culture ruins lives.

Just this month, there was a trending hashtag called #cancelcancelculture, which arose over the #CancelDrSeuss ordeal because a few of Dr. Seuss’s comics/books which had imagery and content that was culturally insensitive.

In a statement, Dr. Seuss Enterprises said they made the decision (last year) after months of consideration to cease publication and licensing of six Dr. Seuss titles.

“Ceasing sales of these books is only part of our commitment and our broader plan to ensure Dr. Seuss Enterprises’s catalog represents and supports all communities and families.”

Philip Nel, a children’s literature scholar at Kansas State University and the author of “Dr. Seuss: American Icon” says that, “There are parts of his legacy one should honor, and parts of his legacy that one should not.” Which I think is true. Even though Dr. Seuss is perhaps the most beloved children’s book author, he’s also come under criticism for outdated and insensitive depictions of racial, ethnic, cultural and gender differences.

We shouldn’t tolerate this behavior, but we shouldn’t cancel him as a person and cancel all his books because of the imagery in a select few. If you want to do your part in stopping cancel culture from getting too out of hand, keep an open mind. Clague Principal Ché Carter encourages the community to unlearn and relearn. “Keeping your mind open to what’s next validates you as a learner,” he said. “What’s next; be fluid as a learner.”

I doubt this sort of public online humiliation will ever truly cease, but to prevent it from doing more harm than good, — if you see yet another celebrity getting canceled over something, maybe think twice before you join in on the raucous crowd of flamers.

This is why cancel culture has gone too far in the US.

Cancel culture is mostly based on rumors that can be easily falsified. People should have a chance to change before having all their “crimes” broadcasted to the world. And cancel culture ruins lives, and the response is hardly ever proportionate to the offense committed.

Of course, people need to be held accountable for their actions, but this has to be in proportion to the misdemeanor committed. “Cancel culture” began as a way to call out people’s questionable choices, but now has begun to evolve into something that more resembles hating on and bullying these people, but with a reason.

There should never be a reason to condone straight-up cyberbullying, yet here is an excuse to, right in front of us: