The Animal Activist: Time to appreciate the unicorns of the sea before they become extinct 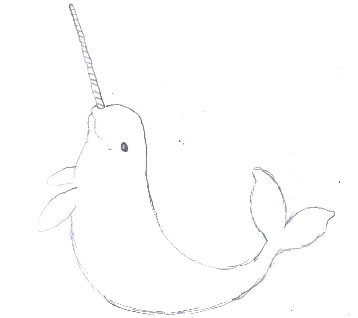 A narwhal is a pale colored porpoise with a long tooth called a tusk, and it is related to the beluga whale.

If I were to ask you to name some mythical creatures you would probably say unicorns, dragons, fairies, elves, witches, or wizards. Those are mythical, but there is a real mythical creature living in the salty seas, the unicorn of the sea. The unicorn of the sea is a nickname for the narwhal. A narwhal is a pale colored porpoise with a long tooth called a tusk, it is related to the beluga whale. By the IUCN (International Union for Conservation of Nature) narwhals are labeled as “near threatened,” which means in the near future they will be threatened with extinction.

One threat to these creatures is climate change, and yes, there is climate change. The climate may have been changing for years, but this is the time when it really affected humans and animals. If you still aren’t convinced then explain why there are orcas in the arctic waters? The large icebergs have been in the orcas’ way from reaching the icy tundra waters. As the ice  starts to melt the killer whales have made their way up north without a struggle. Narwhal’s only place to hide has been invaded with killer whales, (narwhals top predators). With narwhals close to extinction, they aren’t safe up there anymore. With nowhere else to go, the hope that they won’t be extinct is declining along with their numbers.

Another threat to narwhals is water pollution and wastewater. Wastewater is when the water from our toilets can’t go to treatment plants and end up in the ocean. The water can harm many animals living in the ocean, although the arctic doesn’t have many people up there wastewater can move throughout the ocean and end up in the arctic. Narwhals will get very sick and can get other diseases, this water can go as far as killing narwhals and other marine life. Places with too much are called dead zones which have no living organisms hence the name.  Water pollution affects narwhals just as much. They get diseases and some die because of toxic metals, pcb’s, petroleum products, agriculture, industrial runoffs of contaminants such as fertilizers, chemicals, nutrients and untreated waste.

For many years animals have been hunted for their skin, fur, feathers, tusks, and other physical features. One of the many animals that have faced a lot of damage is the narwhal. They have hunted for their skin and tusks. As their numbers have decreased over the years, a  law was passed. It forbade anyone except the Inuite tribe to hunt narwhals. While the rest are forbidden to hunt them, it still goes on. But it’s not the right thing to do. You have to think about it from their perspective. Would you like to be killed because someone thinks you would look in jewelry or because you look pretty. Probably not so you shouldn’t either. It doesn’t matter if they are animals and we are humans, their still living creatures.

There are many solutions to help these lovely creatures. Power your home with renewable energy, and reduce waste water, pick up trash and throw it away correctly. This is their plant too, narwhals deserve to live here too. It’s up to us to help solve part of the problem that we created. Also when you throw something away make sure it lands in the trash and if it doesn’t then pick it up and put it in the trash. When it doesn’t land in the trash, it may get blown away into a drain and all drains lead to the ocean, which harms all wildlife living there.